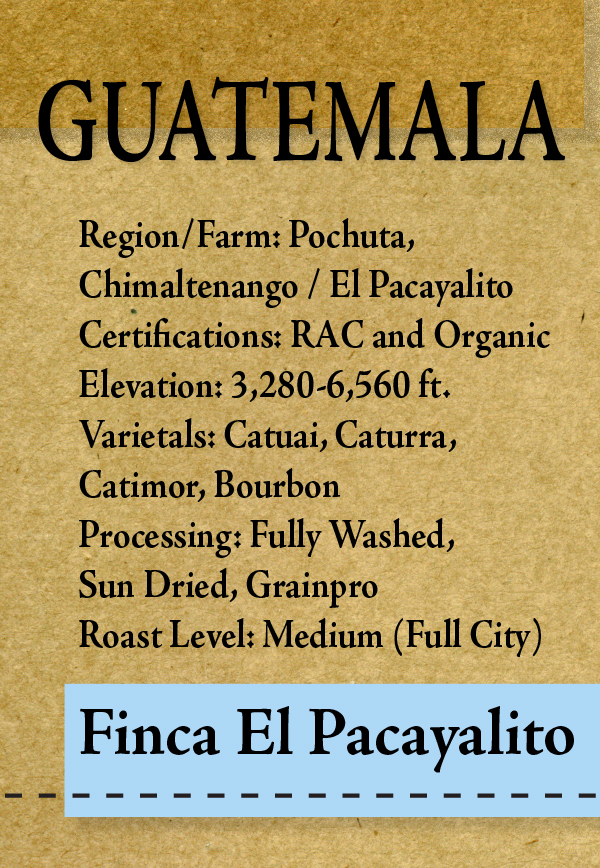 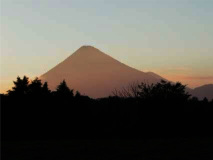 ​​Guatemala SHB El Pacayalito is grown in the region of Pacaya, an active volcano complex southwest of Guatemala City. The high altitude and rich volcanic soil make for a stunning landscape, and some delicious coffees. This coffee is rainforest alliance certified and organic. Finca El Pacayalito is located near Pochuta, which is a town in Chimaltenango, a region of Guatemala.Pacayalito.

​Larger quantity selections are individually sealed in 1 lb. bags to ensure long lasting freshness. Specialty grade, 100% Arabica coffee.​
Other Farm Details:
Origin: Department of Chimaltenango, Guatemala
Miller/Exporter: Transcafe, S.A.
Process: Fully washed
Geographic location: The farm is located in the municipality of San Miguel Pochuta, ideally located amongst rich volcanic soils produced by volcanoes Acatenango and Atítlan together with the warm tropical breezes from the Pacific Ocean provide the perfect environment for the production of great quality coffee.  Coffee from this area is classified as coffee from the region of Atítlan.
Altitude:  The farm is found at an elevation ranging from 1,400 to 1,600 meters above sea level.
Temperature: The average annual temperature of 24 C, with a high of 34 C during the dry season and temperatures reaching 14 C during cold periods, with a relative humidity of 75%.
Precipitation: The annual rainfall ranges between 2,700 to 3,265 mm.
Ecological Zone: Forestry Incentive. Low sub-tropical rainforest (bh-MB) which presents the following conditions:
a.    Elevations that vary between 1,500 to 2,400 meters above sea level.
b.    Native vegetation is represented by quercus sp. which is normally associated with pinus pseudostrobus and pinus montezumac.
Programs: The farm has reforestation and forestry protection programs which involve the Programa de Incentivos Forestales (PINFOR), the Programa de Apoyos Forestales Directos (PPAFD), and the Programa de Manejo de Bosque Natural para Proteccion (INAB).
Certifications: The farm is certified for sustainable agriculture by Rainforest Alliance.  The farm first achieved certification in July 2004 and since then has been re-certified in December 2005 by the auditing team of the Fundación Interamericana de Investigación Tropical (FIIT). Territorial Extension: 470 Ha. Farm Administration
Personnel: The farm’s personnel consists of the general administrator, who is also an agronomist, a field auditor, a field administrator, an electrician and the coffee nursery administrator.  All the farm personnel have extensive experience working at the farm.
Social Programs:     The farm has its own grade school that is authorized by the mister of education.  In El Pacayal, the adjoining farm, there is also PrePrimary school with a computer lab where they have developed an alphabetizing program coordinated with CONAFLFA.  For the sons and daughters of permanent workers the farm provides transportation on Sundays to education centers for further education and degrees.
The farm has a clinic that is managed by the AGROSALUD program, where it provides vaccines, dental care, preventative health measures, de-parasiting, the treatment of accidents, and  infant nutrition.  The clinic also provides over the counter medicines to anyone in need as well as a vehicle for emergency use and private hospital care for workers should they require it. Each farm has housing for the permanent employees offering them the basic services and the seasonal workers have housing provided to them during their stay.  Seasonal workers are given paid transportation, daily rations of black beans, corn, rice, salt, oil, calcium, and one ration of meat per week.  Every worker has access to the cooperative market on the farm that sells your basic convenience store essentials, a mill to grind their corn, a catholic and an evangelical church, and a soccer field and basketball court. The farm pays its employees at least the minimum wage established by Guatemalan law, and 80% of all the work is paid by piecemeal.  Every year the farm donates, aids, and assists with supplies to the local municipality, churches, schools, and communities, as well as maintains and cobbles roads outside the farms borders.
A census was completed in December 2005, reflecting the following:
Population     Families     Permanent Workers     Seasonal Workers
76                        15                  16                                       4
The permanent and seasonal workers are composed of mostly administrators, accountants, supervisors, mechanics, teachers, carpenters, section managers, truck drivers, and tractor drivers. The  majority of the field workers and mill workers are made up of seasonal workers that come from Quiche, Huehuetenango, SanMarcos, Chicacao, Retalhuleu, and Mazatenango.
Total Coffee Trees Planted:  2,342,857
Coffee Varieties:  Catuí 70%, Caturra 11%, Catimor 16%, Bourbon     3%
The Wet Mill: Coffee cherries are harvested and transported to the central mill at Pacayal where they are deposited into individual receiving tanks.  These tanks play an important role by allowing the individual processing of farms and or elevation to separate the various qualities. Farm Size of receiving tank (m3) - 118.25 and Cherry capacity (lbs) - l24,l00. The wet mill has 6 Ruttiman and 4 Penagos pulpers, and it also has 2 additional reprocessing pulpers. There are 6 fermentation tanks with a capacity to ferment 274,010lbs parchment coffee per every 36hrs, 2 fermentation tanks for floated beans with a capacity of 22,2001bs and 3 waiting tanks with a capacity of 162,500lbs. To pulp the cherry coffee beans the mill uses re-circulated water.  The pulp is then deposited without water in decomposition tanks to undergo decomposition and preventing contamination of rivers and the environment.
The Dry Mill: The dry mill has 3 pre-dryers with a capacity of 38,600 lbs of washed coffee each, followed by 11 mechanical dryers with a capacity of 12,000 lbs of washed coffee each.  The dryers are operated by 2 Leffel & Universal boilers; the most recent one was just installed in September2006.  The boilers use macadamia nut shell and coffee husk to produce steam for drying purposes.
The Milling:     When a milling order is given, the stored parchment coffee is first put through a pre-cleaner which removes any extraneous matter.   Then the coffee is husked using two milling lines which include  Pinhalense sizing classifiers followed by a vertical classifier and two Oliver gravity tables. This is all followed by Sortex electronic
color sorters with finishing touches of quality control of a strict hand sorting.
Electric Generation: The farm generates its own electricity to move the entire mill's machinery.  It has 2 diesel Catepillar generators of 456 Kva each, 1 diesel Onan generator of 125 Kva., and 1 diesel Onan  generator of 438 Kva.
Use of Sub-Products: a. Pulp: Once dried by the sun and turning into compost, it is used in the nurseries as well as organic fertilizer for new plantings. b. Coffee Mucilage waters: Once dehydrated in the evaporating
fields, the sediment is used for fertilizer. c. Coffee Husk Used to generate energy.
Cobblestone roads: There are multiple cobblestone projects for both internal and access roads in Pacayalito. ​